TCU vs. OU: Keys to the Game

Inside the Numbers: TCU vs. OU 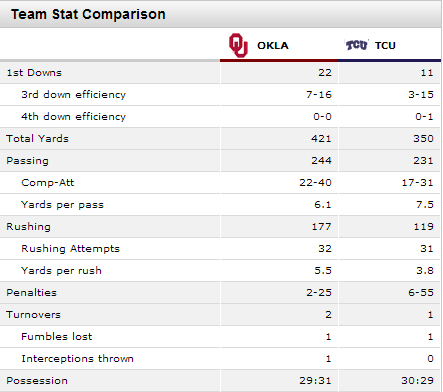 - The fact that we were even in this game is a testament to the defense, despite the yardage given up and not great third down percentage. The yards per rush number is inflated considerably as a result of one missed tackle which went the distance, but the yards per pass and yards per rush with that run removed are very solid.

- The offense was putrid in this one as the coaching staff seemed to think B.J. Catalon III is the ideal power back. This is not the case, but still Catalon got carry after carry into the teeth of the OU defensive line in a game where Matthew Tucker was fully healthy.

- This was a game of inches as well as a game of replays, and each situation where there was doubt about what had occurred broke against the frogs. It may be that the calls were correct, but in the case of two turnovers (one that set up an OU score, one that prevented a TCU score) they were ruled in the Frogs favor in the first place and overturned by replay- The definition of close. The Frogs also barely missed a field goal that passed just over the right upright.

- Despite a shank that set up OU's first touchdown, the man of the match was definitely TCU's freshman punter Ethan Perry. OU doubled TCU's first down total and had over 400 yards, yet the Sooners only scored 24 points and were within striking distance for the Frogs all game. Why? Because Perry pinned the Sooners deep repeatedly, so even when the Sooners were able to get a few first downs in a drive it didn't immediately put them in field goal range. That's all Perry.

- The end of the game is going to stick with Frog fans until the team hits the field again later this week. Senior OL Blaize Foltz committed an awful and unnecessary holding penalty on what would have been a touchdown run from Trevone Boykin, and Boyce was definitely interfered with on the fourth down pass play. The boos resonating the stadium for the rest of the game and the referees incredibly quick departure from the field after the time expired speak wonders to that call. OU's fans prematurely chanting "BCS" will ring in our ears for a long time to come.

- Amon Carter is the nicest stadium in the country that hasn't seen its home team win a conference game in it yet. Next year's home slate: Kansas, Baylor, Texas and West Virginia (We got screwed out of the Oklahoma State return game this year due to shady A&M scheduling practices). The wins will come.